IELTS vs. TOEFL vs. PTE: Which Test to Take?

IELTS vs. TOEFL vs. PTE: Which Test to Take? Is it your dream to study abroad, work or migrate to an English-speaking country, but English is not your first language? If that is the case, then you must clear the English proficiency test. The test’s purpose is to assess your reading, writing, listening, and speaking skills.

Well, the first question you should ask yourself is which test to take? IELTS, TOEFL or PTE? There are several factors to consider before making a choice. Let’s look into them in detail.

TOEFL also known as the Test of English as a Foreign Language, is a standardized English language proficiency exam for non-native English speakers. It is a computer-based exam, launched back in 1964 and was administrated by the Educational Testing Service. TOEFL is a highly recognized and accepted exam by most institutions around the world. It can also be used for student visa applications and work requirements.

The TOEFL exam has two formats, TOEFL iBT and TOEFL PBT, however, TOEFL iBT is preferred over the TOEFL PBT by most candidates. The test is designed to assess all four levels of communication skills: Reading, listening, speaking, and writing.

FEE: In general, the cost varies from $185 to $300. There could also be some additional costs for rescheduling, late registration, or score review. (Exam fees vary per country worldwide)

PTE or also known as the Pearson Test of English Academic Test is a relatively new English proficiency test launched by Pearson Inc. in 2009. Just like TOEFL, it is conducted online. The English proficiency test uses AI technology to grade the exams. Candidates preferred PTE, because of its quick result element, you can have your results in just 48 hours after taking the exams. Also, language proficiency is available in over 70 countries in the world.

There are three types of PTE, which include PTE Academic, PTE General and PTA Young Learn Test. In addition to this, there is no age requirement so candidates from any age group can take this exam.

Furthermore, the PTE places more emphasis on how the test-taker uses English in communication because it is designed to evaluate real-life English language skills. It has four modules: speaking, writing, reading, and listening.

IELTS or the International English Language Testing System, unlike the other two, is a paper-based exam, however, it is possible to take it online. It was launched by the British Council, Cambridge English Language Assessment, and the international development program of Australian Universities and Colleges in 1989. When it comes to the English proficiency test, IELTS takes the cake. After all, IELTS is famous all around the world with test centres available in over 140 countries and is trusted by 11,000 organisations around the world.

The IELTS English proficiency test offers two formats to its candidates: IELTS Academic and IELTS General Training Test. These two tests are different from each other, especially in the writing and reading test sections and their purpose.

FEE: The cost varies from $170 to $300. The cost slightly differs in some countries for paper-based and computer-based tests. (Exam fees vary per country worldwide)

Each of these tests is designed to evaluate a candidate’s English language skills. So, the most often asked question is, which is the easiest one? There’s no definite answer to this question, to know which test suits you the best you must dig a little deeper to get a better understanding. So, let’s just do that!

Most institutions, companies and governments recognize and accept the IELTS, PTE and TOEFL. You can see the increasing demand for these exams by the testing centres available in various countries. For example:

In conclusion, the PTE academic is more frequent than all the other English proficiency tests and the TOEFL exam, which has 4500 testing centres available worldwide, tops the other two language exams in terms of testing centre availability.

Exam frequencies comparison of the IELTS, PTE, and TOEFL

The IELTS, PTE, and TOEFL exams have different scoring systems

The computerized scoring method used by the PTE employs an automated scoring algorithm. Additionally, it is based on a global scoring system and can be interpreted using the CEFR levels. It gives scores on a scale from 10 to 90, with 90, obviously, representing the highest level of language skills. They say that this system of scoring helps students to gauge their language abilities accurately.

TOEFL is the oldest test format, and it provides scores for reading, writing, listening, and speaking. Each module of the test is marked from 0 to 30, and the overall score of the test is 120 marks. TOEFL uses a centralised scoring network for its reading and listening test section and a combination of automated AI scoring and highly trained professionals for its writing and speaking test section.

The IELTS test uses a band scoring system and is unquestionably the most widely used format in the world. Scores are distributed in “bands” from 0 to 9. All four parts of the test are awarded a band score. IELTS scores are always calculated to the nearest 0.5. For example, if your band score is 6.75, it would be rounded off to 7. A band score of 9 means the test-taker has exceptional skills in the English language. 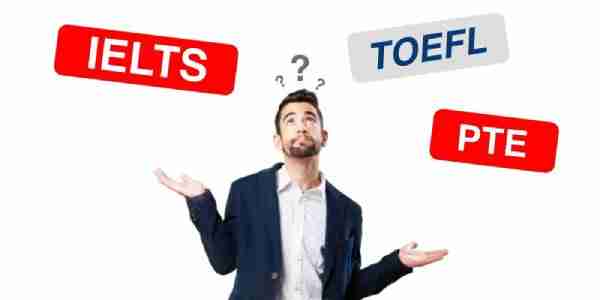 Advantages and Disadvantages of TOEFL, PTE and IELTS?

Which English Proficiency Test Should I take?

IELTS is no doubt the most famous among the three. However, all three of them have some advantages and disadvantages that can help you choose between IELTS, TOEFL, and PTE.

At the end of the day, it depends on the candidate if they find the exam difficult or easier. If you are prepared, then the exam will be easy for you. And when it comes to choosing which test you should take, I would recommend checking your university requirements and making your choice according to them. Also, keep in mind the test dates and test centres available to you so it will be more convenient for you.

And in case you are stuck or need any kind of help reach out to us at Edvise Hub. Universities in Australia to Study Law Admission at King’s College London – Everything